A man identified as Solomon Monday Orji has allegedly been killed by his cousin brother, Chinaedu Omeonu in Mgboko Umuoria community in Obingwa Local Government area in Abia State.

According to report, the suspect killed his cousin, Mr. Orji after a serious quarrel between them due to the fact that the suspect flogged the deceased son mercilessly when he came to pick some mangos from his house, up to the point that he fainted. 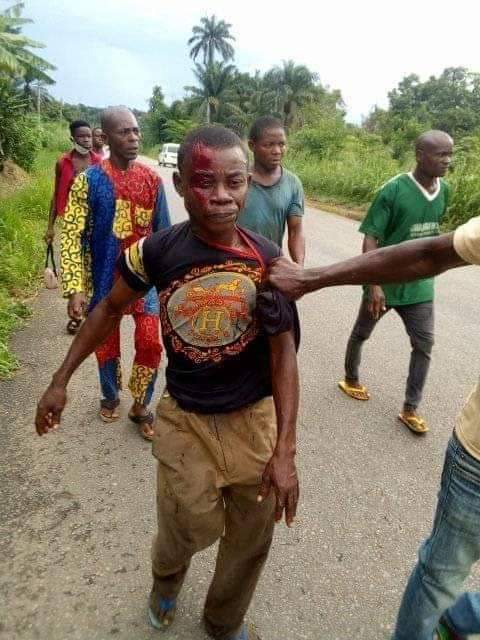 When the deceased confronted his cousin and asked why he flogged his son in that manner, the suspect, Chinaedu reacted and it led to an exchange of words between them.

The deceased Orji was said to have later left Chinaedu’s house with his son after much quarrel between them.

According to a witness, the suspect in his anger, went into his house to get a cutlass and rushed the deceased from behind. Unknowing to Orji, his cousin, Chinaedu cut him at the back of his neck and he died on the spot.

The youths of the Mgboko Umouria community in rage apprehended and beat Chinaedu to pulp.

Chinaedu was later handled him over to the police.

Husband Physically Assaulting His Wife In Front Of Their Kids (video)

Thu May 14 , 2020
Domestic violence can not be overrated most especially in Africa were on a daily basis series of events were husbands beat their wives mercilessly occurs everyday. There was some photos relating to domestic that went viral on Facebook two days ago posted by a man identified as Afobaje Maiyegun who<a class="read-more" href="https://hgsmediaplus.com.ng/2020/05/man-kills-his-cousin-over-mango-in-abia-state-graphic-photos/"> […]</a>

Baby Found Dead Inside A Church In Rivers State (Photo)

Youths Nab Man And Woman Who Kidnapped And Sold A Child In Anambra (Photos, video)

We use cookies to ensure the best experience for our users on our website. If you continue to use this site it means that you are happy with it.Ok